Built in the first half of Henry VIII’s reign, Layer Marney Tower is in many ways the apotheosis of the Tudor Palace. The building is principally the creation of Henry 1st Lord Marney, who died in 1523. His son John died two years later and the project was never finished. Layer Marney Tower has always been a family home. It has had 11 family living in it spanning 500 years.

Built in the first half of Henry VIII’s reign, Layer Marney Tower is in many ways the apotheosis of the Tudor Palace. It is the creation of Henry 1st Lord Marney, who died in 1523, and his son John, who continued the building work but died just two years later, leaving no male heirs to continue the family line or the construction. What was completed was the main range measuring some three hundred feet long, the principal gatehouse that is about eighty feet tall, a fine array of outbuildings, and a new church.

In building on this scale the Marneys were following the example set by Henry VIII, who believed that a building should reflect the magnificence of its owner. Henry Marney as Lord Privy Seal, Captain of the Bodyguard and holder of many other influential positions clearly intended to display his status this way. Other courtiers were doing the same, and just as they rivalled each other for influence and power at court, so they tried to out-do each other in the splendour of their buildings. The Marneys enthusiastically entered this game of one upmanship, building the tallest of all Tudor Gatehouses, with lavish use of terracotta and stucco, working in decorative detailing derived from Italy. The tomb of Henry, 1st Lord Marney is perhaps the highpoint of all that was built, combining beauty, innovation and a lightness of touch.

On the death of John, 2nd Lord Marney, his young daughters became wards of the Duke of Norfolk and he eventually sold the house to Sir Brian Tuke, Treasurer to the Royal Household and Governor of the King’s Posts. His widowed daughter-in-law entertained Queen Elizabeth 1st in 1579. The Queen most probably only stay a short while, as there are no contemporary notes of her visit beyond a bill for a Courtier’s advance inspection for the trip. 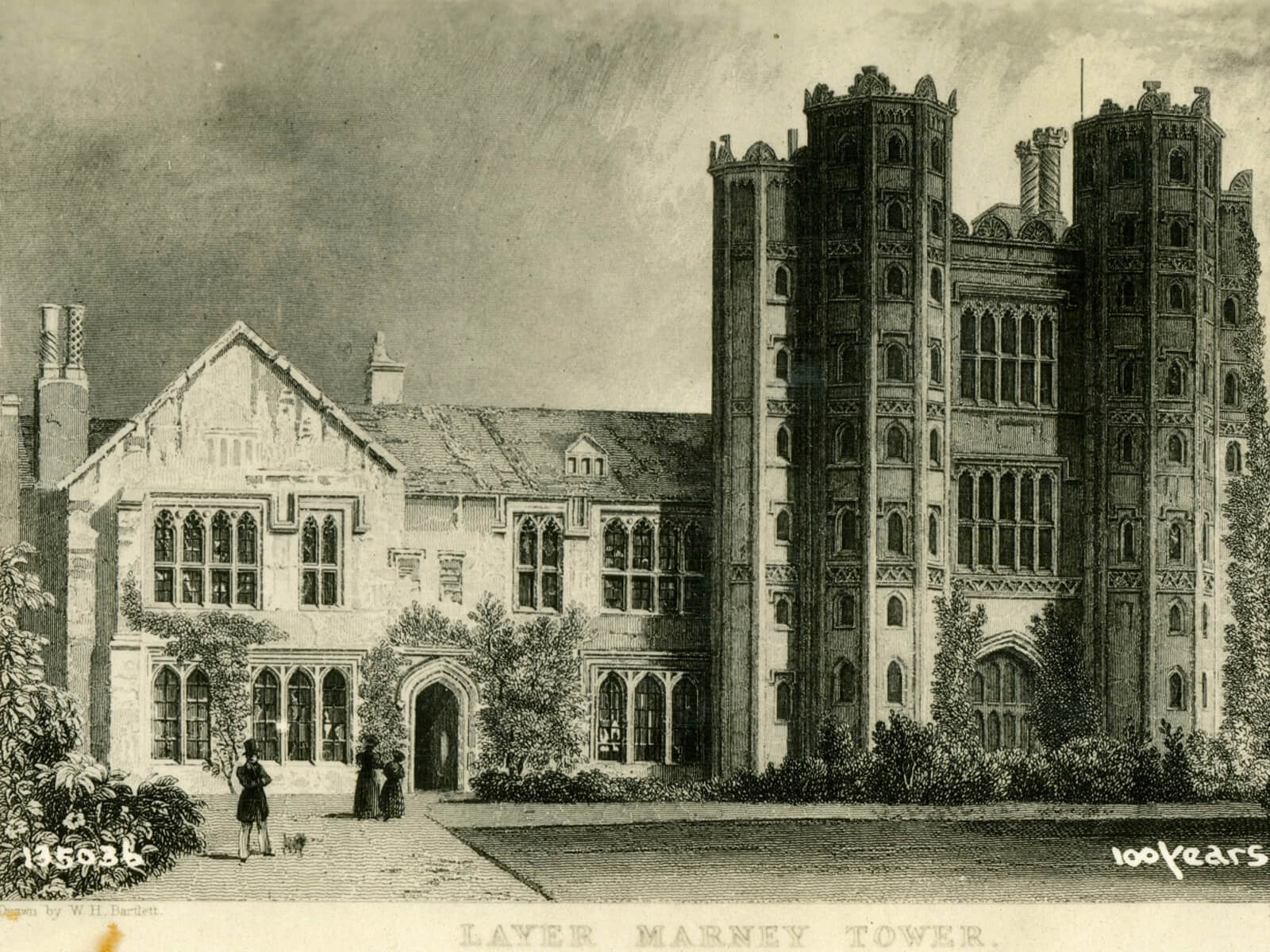 Nicholas Corsellis bought the estate in 1667 for £7,200 with money he had made as a merchant selling indigo, lead and tobacco. He had been educated at Felsted School and soon after buying Layer Marney Tower he gave the living and accompanying Rectory to his old headmaster, the Rev. William Drake. HIs family lived 6 generation at Layer Marney Tower.Mathew Corsellis’ executors sold the estate in 1835 to Quintin Dick, a hughly successful Far East trader and MP for Maldon. He is reputed to have spent more money bribing his constituents than any other MP of the time. It seems to have worked since he held the seat for seventeen years.

During the ownership of the Peache family, the buildings suffered considerable damage from the Great Earthquake of 1884. A subsequent report in The Builder magazine 1886 described the state of the house as such that ‘the outlay needed to restore the tower to anything like a sound and habitable condition would be so large that the chance of the work ever being done appears remote indeed’. Fortunately the repairs were begun, by brother and sister Alfred and Kezia Peache, who re-floored and re-roofed the gatehouse, as well as creating the garden to the south of the Tower. James Calthorpe Peache, their son, went on to add bathrooms, electricity and central heating.

Walter de Zoete, a successful Stockbroker, bought the house in 1901 who carried on the modernisation. The place had an Edwardiian heyday, with a team of 13 domestic and 16 outside staff. He enlarged the gardens, built a folly known as the Tea House (converted to a long let cottage in 1999), and converted the stables into a Long Gallery to house his collection of furniture, paintings and objets d’arts. 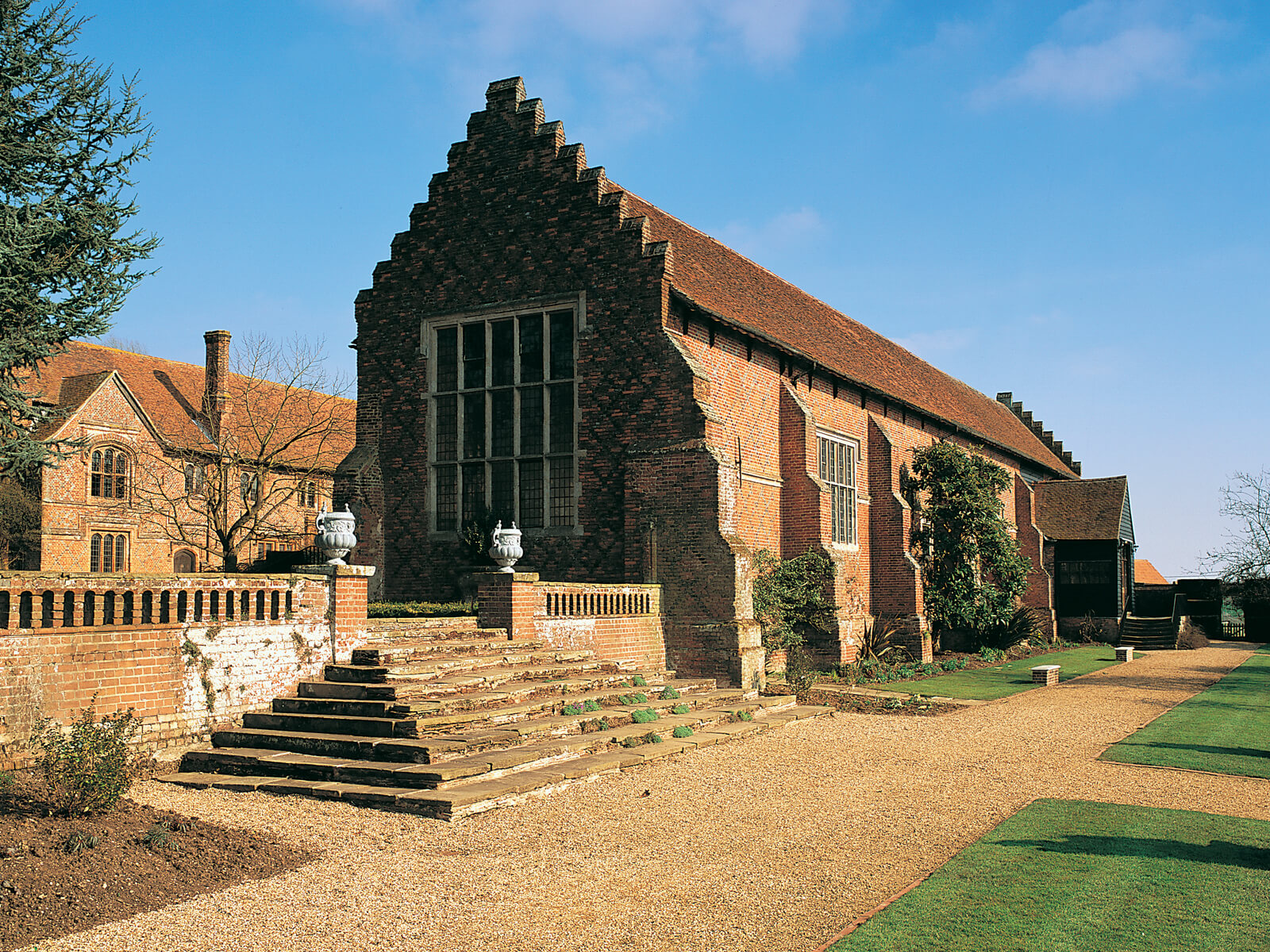 Walter de Zoete lost money in the Japanese stock market crash, and sold the house to Dr and Mrs Campbell. Their daughter, Maybud was a well known botanist and botanical explorer added some lovely touches to the garden and is famous for her botanic gardens at Val Rahmah in Menton, South of France. Layer Marney Tower was mainly looked after by Caretakers, with the family coming on occasional visits. They tried to sell it 3 times through their 30 year ownership.

Gerald and Susan Charrington were married in Layer Marney church, and two years later, in 1959, Mrs Campbell’s executors put the house up for sale and on a romantic whim they bought it. It has been occupied by the Charrington family ever since.